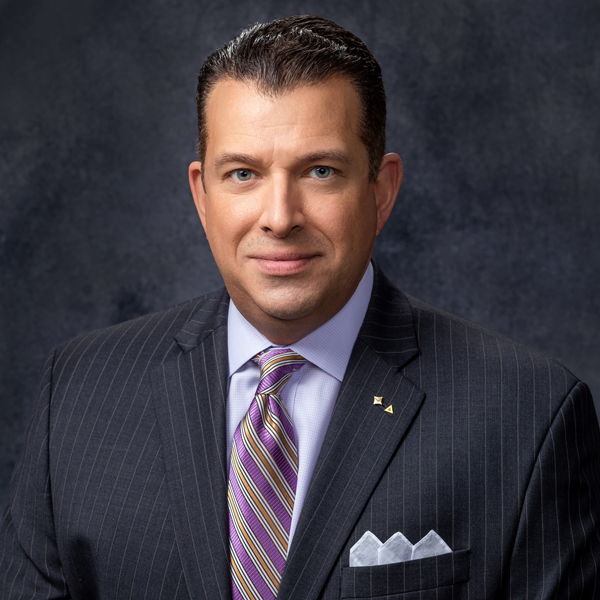 Albanese's volunteer service began in 2005 when he was appointed advisor to the Beta Lambda Chapter at Lehigh University, a position he held for six years. In 2008, he served as an Eastern Division vice president for the Omega, Theta Chi and Theta Tau Chapters.

In 2011, Albanese first served on the Arch Chapter when he was elected as the 50th Eastern Division president. He was reelected in 2013. During his four years in office, the Eastern Division grew from 24 to 29 chapters and colonies and from 952 to 1566 men. Ever committed to representing the men of his division, Albanese drove more than 34,000 miles visiting the chapters he served as division president.

In 2015, Albanese became the advisor for the Iota Pi Chapter at the University of Vermont, a chapter for which he became an honorary initiate in 2014. After completing this one-year commitment, he served as the advisor for the Kappa Gamma Chapter at Monmouth University. In 2017, he was appointed division vice president for the three chapters in New Jersey: Rho, Kappa Gamma and Kappa Epsilon.

Albanese has served on two separate housing corporations, as a member of the Fraternity's Sesquicentennial Commission and numerous other committees. He is chairman of the Delta Tau Delta Bethany Founders' House Committee.

Albanese has been recognized for his volunteer service to Delta Tau Delta in numerous ways, including Theta Epsilon Alumnus of the Year, Eastern Division Chapter Advisor of the Year, Member of the Heritage Society, Member of the Bethany Society and a recipient of the William J. Fraering Award. In 2016, he was the 445th individual cited into the Fraternity's Distinguished Service Chapter.

Anthony is currently the owner and president of Alman Group, LLC. A registered lobbyist in New Jersey, he interacts with officials at all levels of government in the State to further the interests of the firm's wide variety of clients.